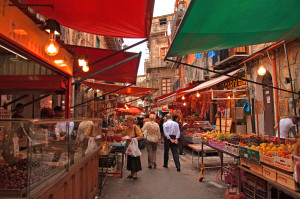 Ballarò is one of the worldwide best known historic markets of Palermo. Ballarò market is one of the oldest of Palermo and stretches from Casa Professa square to the bastions of corso Tukory.

In the market are also sold the typical street food of Palermo cooking such as panelle, crocchè, spleen sandwiches, quarume (veal entrails in vegetable broth), boiled octopus and vegetables.

Ballarò market is only 100 metres away from Fiume flat of Palermo Al Centro.

From Vittorio flat of Palermo Al Centro is only 1 kilometre away.