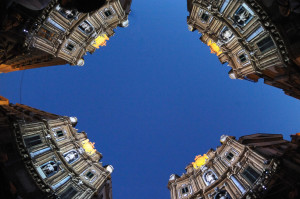 The Quattro Canti (four corners), also called piazza Vigliena, is the name of an octagonal square at the crossroads between two main streets of Palermo city centre: via Maqueda and corso Vittorio Emanuele.

This special square was also called Octagon of the Sun or Theatre of the Sun because during the day at least one of the architectural wings is lit by the sun.

The decorations of the crossroads were realized between 1609 and 1620. The four fountains are symbols of the four rivers of the old city: Oreto, Kemonia, Papireto and Pannaria. Then, there are the four allegories of seasons represented as Aeolus, Venus, Ceres and Bacchus, the statues of Charles V, Philip II, Philip III and Philip IV and the statues of the four saints of Palermo: St Agata, St Ninfa, St Oliva and St Cristina.

Quattro Canti is only 500 metres away from both Fiume and Vittorio flat of Palermo Al Centro.