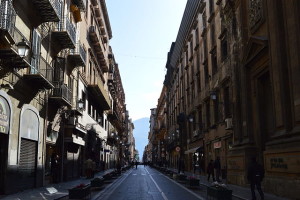 Also called Strada Nuova (new street), via Maqueda is a historic street of Palermo that crosses the old Cassaro street. It has been built between 1598 and 1601 and is named after the man who projected it, the Duke of Maqueda Bernardino de Càrdenas y Portugal,  viceroy of Sicily.

At the crossroads with the Cassaro there is piazza Vigliena, that has octagonal shape, better known as Quattro Canti (four corners).

Via Maqueda is only 100 metres away from Fiume flat of Palermo Al Centro.

From Vittorio flat of Palermo Al Centro is only 600 metres away.